A quick dive into the relationship of the Star Trek Universe and the Terran Empire.

April 5th is an important day because in another 43 years, according to Federation history Earth will make First Contact with an alien race in 2063. But as we celebrate First Contact Day let’s lets investigate if there’s more to this historic day, specifically its relationship to another universe.

The Mirror Universe is a Star Trek staple that fans flock to again and again. Is it just to look in that funhouse mirror and see what evil looks like? To the layperson, they know that goatee equals evil in the Star Trek universe, except for Captain Sisko, he just makes that look good.

No, we’re talking about the universe where Starfleet is still out there roaming the spaceways, but the utopian worlds of United Federation of Planets don’t exist, instead, it’s the ruthless and brutal Terran Empire, where the bad guys have scars along with their goatees, the women have midriffs in their uniforms and promotions come at the end of a blaster or blade. Of all the universes that Starfleet has interacted with it’s the universe of the Terran Empire that is revisited again and again, which makes me think there’s something more there.

But how does this relate to First Contact Day, well get ready to have your brain go to red alert, what if we got it wrong? Instead of what we know as the Prime Universe with a Federation, what if “Evil” Spock came first? Has your brain had a warp core breach yet?

If any show has spotlighted the dangers of altering the past to change the course of history it’s Star Trek. Don’t believe me ask Edith Keller, if she lives then there is no United Federation of Planets (ST: TOS – “City on the Edge of Forever”) or US Air Force Captain John Christopher, if he didn’t return to his time to have a son, then the first mission to Saturn, a pivotal point in Earth’s space exploration doesn’t happen (ST: TOS – “Tomorrow is Yesterday”.) Captain Picard learns the hard way about what would happen if he allows Q to change his past so that he wouldn’t need an artificial heart, needless to say, he didn’t like it (ST: TNG – “Tapestry”). Captain Sisko got a firsthand account of the ramifications of one man being in the right place at the right time to fix the course of history (ST: DS9 – “Past Tense, Parts I and II“.) Even the Federation’s greatest threat, the Borg, get in on the time travel action by trying to stop Earth’s First Contact, the genesis of the Federation (Star Trek: First Contact,) but we’ll come back to this one in a second.

The Federation’s timeline is as fragile as a Betazoid soap bubble. 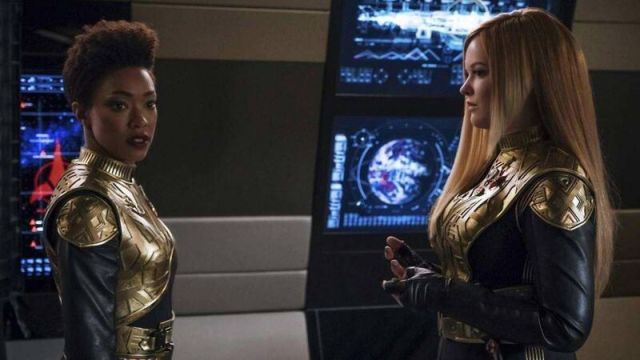 I can hear the lighting of the torches and chants of phasers set to kill, but is it really that crazy of an idea to consider that the birth of the Federation is due to Borg time travel manipulation? According to Federation history, the Federation is born out of the First Contact of the people of Earth and a Vulcan survey ship. But what if it’s that moment that the actions of the Borg and the Enterprise-E alters history and the seeds of the Federation are planted, creating the timeline that we know as the Federation very much in the same way that the Alternate Universe is created when Spock and Nero emerge in 2233 (Star Trek 2008.)

Star Trek has a few chicken/egg paradoxes, the crew of Enterprise – NX meet their future descendants from the past (Enterprise – “E2”,) Voyager is partially responsible for the microcomputer revolution of the 20th century (ST: Voy – “Future’s End Parts I and II”), and this is right up there with them.

We’ve already seen how visitors from the future can cause rifts and splits in the timeline, how events can be shifted by the actions of a few. While not a time travel story, we saw Worf move from dimension to dimension, witnessing all the slight variations on the Federation (ST: TNG – “Parallels”), again showing us that moments in time can shape the course of history.

If we look at events where the timeline is changed before First Contact, there is no Federation, but post First Contact, the Federation still exists, again not as great as the utopian worlds of the UFP. When Starfleet doesn’t “correct” the timeline, the new reality that they are trapped in resembles something closer to the Terran Empire. Now let’s stretch the fabric of Trek history for a second and take another look at Earth’s First Contact.

The Zephran Cochran that the Enterprise-E crew meets isn’t the noble shepherd that history tells them. He’s a greedy, opportunistic drunk who only wants to invent warp speed to get rich, and fights the Enterprise crew every step of the way to avoid his future, it’s only the example of Picard and the crew of the Enterprise that inspires him to be better and strive for a future with a Federation, a handshake instead of a shotgun (Enterprise – “Mirror Darkly”.)

When the Constitution Class Defiant vanishes in 2268 (ST: TOS – The Tholian Web,) we see it move into the past and jump over to the Terran Universe, almost as if it went to its default universe (ENT – “In a Mirror, Darkly”.) When the landing party of the USS Enterprise has a transport accident, they switch places with their counterparts (ST: TOS – “Mirror, Mirror”) and when the runabout USS Rio Grande out of Deep Space 9 travels through the Bajoran Wormhole, another accident bringings them to the Terran Universe (ST: DS9 – “Crossover”.)

My most important argument, if Star Trek has always been a window into our future, then the next time you look out the window, think about our world and consider which universe is closer to what you see. Before our current situation, our news cycles were filled with stories about walls and sanctuaries, much in the same way that we see it in (ST: DS9 – “Past Tense, Parts I and II“.) In the end, the world that we live in with borders, apathy, and hatred sadly looks more like the forerunner to the Terran Empire than the bright and hopeful one of the Federation.

As you celebrate First Contact Day in this time of quarantining, remember this is only a moment in time, so please help in forging the course of history as our great Captains have done for the Federation, and never forget that a simple handshake can create a vast utopian society that while not perfect is pretty damn close to it.