Here are some of my all time favorite drawings from my various sketchbooks, done with a pen.

My first sketch is a design for a character called Bishop, a member of my fictional group Lord Chamberlain’s Men. A line of sight teleporter, I wanted him to have an energetic and surreal effect when he teleports.  At the time I had the inspiration of his teleporting effect I had two ballpoint pens on me, which helps add to the piece for me. This sketch was so influential on my thinking that I abandoned the individual designs for the other characters, and opted for a more uniform look along his design. 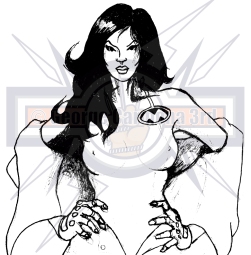 Another drawing from an old sketchbook, is a quick piece of another character from my universe, Makeshift. At the time I was playing around with the gender of the character thinking that he might work better as a woman. After some more playing around with the idea I opted for the character to remain male because I wanted to really bust this character up and put him through the wringer. The exotic sultry look here didn’t lend to that, but the look of this sketch stuck with me way past the design stage. 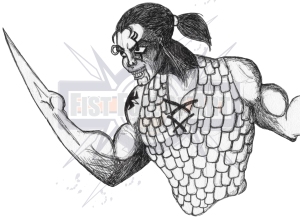 The last ballpoint drawing I did during my days as a student (odds are I probably did it during class.) I wanted to create a twisted sinister killer with morphing powers and a very gritty look. Basically a mash-up of Loki and the Joker.

The versatility of a bic pen can never be truly overstated.