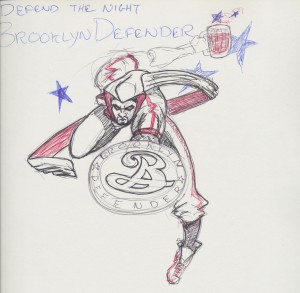 Last night was Drink and Draw NYC, a positive space where artists can come together and sketch a live model. Created and run by comic book artist Khary Randolph, last nights D&D had the distinction of being the 6th anniversary of the get together and also the unveiling of Brooklyn Brewery’s New York Comic Con specialty beer, The Brooklyn Defender.

Each year, Brooklyn Brewery picks a comic book artist to design the look of the character for their bottle and this time the call went out to D&D’s very own Khary. To celebrate, Brooklyn Brewery was gracious enough to provide us with free samples of their specialty brew.

And I doubt it is necessary to state that when you offer folks free beer they will show up. Artists were asked to share their work based on model Atallah Divines cosplay of the character. The artwork will be on display at Brooklyn Brewery’s official launch party for the Defender next week. Also, I just got word that I will have two pieces on display based on these sketches, if you’re unable to attend the party look for the final versions here, next week.

Again thanks to Brooklyn Brewery for the beer, as well as Khary Randolph and the souls of Drink and Draw NYC for helping me to stay creative. Here’s to more beer and more art.