Friday – Day 2 of NYCC was redemption day, my MacArthur returns, my I’ll be back, my Return of the Jedi. With more panels to check out, I was able to make 4 out of 6, in Baseball terms I had a great day at the plate.

Starting with the Marvel 75th Anniversary opening panel, I was in the presence of Marvel luminaries; Len Wein, Chris Claremont, Louise Simonson, Walt Simonson, Rick Leonardi, Fabian Nicieza and moderated by Marvel editor Mike Marts. The panelist spoke on their time at Marvel, the creation of characters like Wolverine and Apocalypse and the rise of the crossover events. The best quote from the group was Mr. Simonson “I’m an old guy, I don’t care.” As to what he doesn’t care about, well what is said at Comic Con stays at Comic Con so no ones feelings get hurt.

My next stop was the I’m DMC I Can Draw!” The Artists of Darryl Makes Comics. A new graphic novel from Hip-hop icon Darryl DMC McDaniels from the legendary group Run-DMC. Promised at last years NYCC, DMC and crew make good on their promise of a Hip-hop hero for all generations. 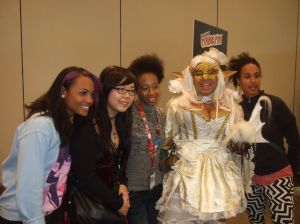 That was followed up by the Women of Color in Comics: Race, Gender and the Comic Book Medium panel moderated by comic mogul Regine Sawyer, creator/writer of Ice Witch and the Rippers. This panel spoke about the changing face of the comic book industry, the importance in representing all of its audience and sense of invisibility that some of the panelist had to fight in the path to becoming comic creators. 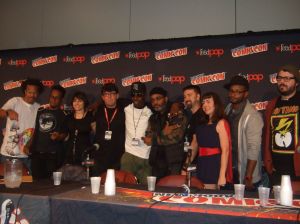 My last panel stop was the Hip-Hop & Comics: Cultures Combining. A mix of music icons like Pete Rock and Large Professor and comic creators Khary Randolph and Ronald Wimberly, et al. This group discussed the similarities of the two genre; both being fusions of other genres and its creation of other identities and alias on stage and in print. The most interesting comparison made by the panel was that of artists and rappers being modern-day ronin. 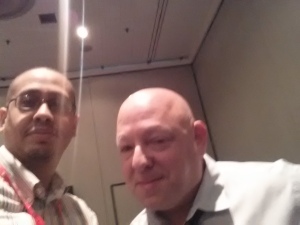 Day 2 counting the cosplayers, comic haul and quick picture with Brian Michael Bendis, I was batting over 600. Day 3 you’re next. 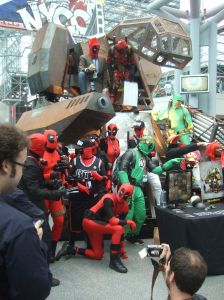